CONTACT FORM
By clicking on the button, I confirm my consent to the processing of personal data

In August 2020, the Urai Sports Palace “Start” was transformed beyond recognition. ArtAlyans artists painted the entire facade of the building (which is about 3 thousand square meters of surface!) in azure blue and implemented in the graphics of athletes eager to win.

How was the drawing created?

For the 55th anniversary of the city, it was decided to completely transform the sports palace. The main color of the building was matched to the facade of the ice palace, which is located nearby.

The project began with a thorough preparation. The artists cleaned the surface, primed and degreased the plates. It took about a thousand liters of paint, varnishes, 500 aerosol cans to create the picture.

Now a purposeful swimmer proudly “floats” along the facade. The drawing takes up two outer walls at once – the facade and the side. This creates the illusion of volume. The hero of the picture looks so realistic that it seems that now he will shower with spray from the pool.

Sports Palace “Start” is the oldest sports complex in the city. It is visited daily by hundreds of young and adult athletes, beginners and professionals. The question of repairing the UK and updating the appearance has long worried the townspeople. And only this year, with the support of Lukoil, their dream was realized.

While the ArtAlyans artists were transforming the complex into a real art object, the roof of the building was being reconstructed. The close-knit work of the artists and the repair team allowed in a short time to change the appearance of the “Start” radically, to make it brighter, more modern and safe.

The design of the ArtAlyans art studio has filled the sports complex with new life. Today, the palace literally inspires to work on oneself, to move to personal and professional heights. New “Start” – the place where the winners train! 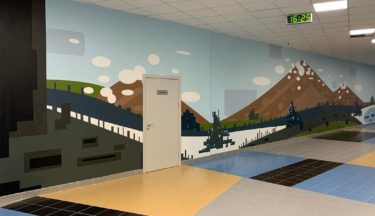 Down with dull school days and the usual gray walls! 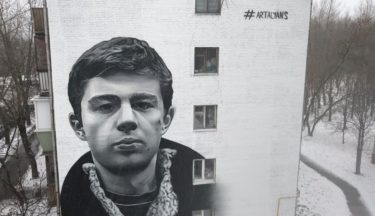